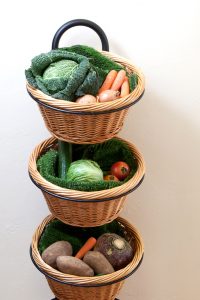 From left, Maureen Thompson and Tracy O’Donnell of the Teesside Hospice in the new polytunnel on their Town Farm allotment in Middlesbrough.

One of the most unusual donations Teesside Hospice has received is 5 beehives!  The beehives were donated to our Guisborough store and in true   Teesside Hospice form they were utilised to raise funds for the hospice. 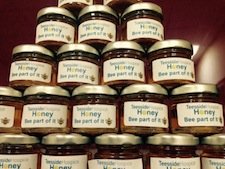 Collaboration with the Probation Service

The hospice has strong links with the Probation Service who actively engage in activities which give back to the community. There is a strong sense of recycling at Teesside Hospice and book logs are made by these volunteers out of books that could not be sold in the charity shops. These book logs are then sold in store to be used as fuel and kindling for fire. The recycling doesn’t stop there either – china cups and saucers are upcycled and made into quirky bird feeders and unsalable clothes are cut into rags ready to be made into rag wreaths at Teesside Hospice vintage workshops.

Teesside Hospice is a community based, diverse charity that could not continue without the hard work and support from each and every member of staff, volunteers and the public. Teesside Hospice continues to innovate and create new ways of fundraising every day- watch this space!