Cancer Research UK opens its latest charity SUPERSTORE in Swansea,  at the

Pontarddulais Road Retail Park.  Situated just off the A483 the Park is easily

accessible, and has lots of free parking.

This very large Store will sell all manner of goods, including Furniture and Electrical’s, along with all the usual stock you would expect, plus there is a significant range of goods at £ 3 or less – Wow!

This is the 28th Superstore from Cancer Research UK and it will be a valuable  asset to their retail portfolio, and to Pontraddulais Park, by attracting more visitors.

Professor Paul Dyson, a microbiologist at Swansea University, and Dr Lee Parry cut the ribbon at the new Cancer Research UK superstore in the Pontarddulais Road Retail Park on February 10.

A local choir from Cadle Primary School in Swansea also sang for shoppers before the doors opened. 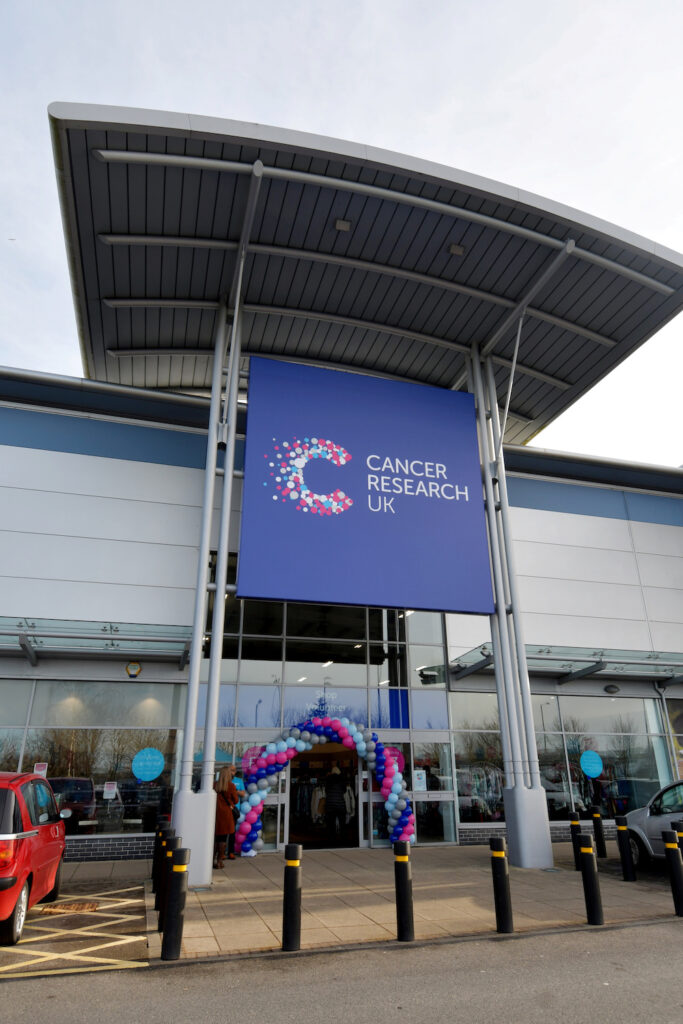 The 8,000 sq. ft store will sell everything from furniture to electrical items, as well as toys, clothing and homeware.

The scientists were chosen as the charity’s special guests after receiving a £514,000 grant from Cancer Research UK to develop a new test which aims to detect bowel cancer at an early stage.

Prof Dyson, who has been working at Swansea University for 32 years, said: “It’s wonderful to be opening the new superstore which will help fund more scientists like ourselves to find better ways to prevent, diagnose and treat cancer.   “Our work has been funded thanks to the public’s generosity and we’re delighted to have opened the store to show people how their support makes a difference to new scientific discoveries so more people can survive cancer in the future.”

The new test being developed by Prof Dyson and Dr Parry, alongside Dr Sunil Dolwani at Bowel Screening Wales, is aiming to monitor a strain of Salmonella in a patient’s poo sample to test if polyps are present, which can be a sign of cancer.

Dr Parry, from Ferndale in the Rhondda Valley, added: “It’s fantastic to have an investment like this which could one day lead to a rapid test to diagnose bowel cancer at an earlier stage, when treatment is more likely to be successful.”

Each year around 2,400 people are diagnosed with bowel cancer in Wales*.

When diagnosed at its earliest stage, more than 9 in 10 people with bowel cancer will survive their disease for five years or more.

The researchers are also looking at how the strain of Salmonella could be used to detect the exact location of polyps and simultaneously treat them.

“It can be difficult to find some polyps during a colonoscopy but we have found that we can use the bacteria to help locate polyps which can’t always be seen on camera,” said Dr Parry.

If the research shows this test produces reliable results, there is also the potential to use the test to help diagnose other cancer types including breast and pancreatic cancer.

The manager of the Swansea Superstore, Abdou Hassan, is delighted to be running the shop and is determined to support life-saving research after his friend sadly died from the disease.

He said: “A close friend of mine died of cancer and she tragically left behind four children. She was my wife’s best friend and she was an amazing lady.

“It definitely motivates to work even harder as the items that people buy and donate at the store has an impact on better treatments in the future.”

Abdou, who previously worked at the charity’s Cardiff Superstore, is pleased that the shop provides sustainable fashion and is a “treasure trove” for bargain-hunters.

He said: “We sell quality items and pretty much everything is £3 or less. The shop looks fantastic and we are so proud to have opened a superstore in such a prime location in Swansea.

“There’s also plenty of free parking right outside, so it is easy to drop off any pre-loved items.”

Julie Byard, Cancer Research UK’s director of trading, said: “I hope people in Swansea will support this new superstore so that we can help keep making new discoveries.   “We are incredibly proud of our community of researchers. We support thousands of scientists and world-leading initiatives in Wales and across the UK, all with the aim to improve the lives of people with cancer.

“Money raised at this store and all the other Cancer Research UK shops, will help more people survive cancer and that’s why we need people to support it, by shopping here and donating goods.”

With around 19,600 people diagnosed with cancer every year in Wales** Cancer Research UK was able to spend around £4million in the country last year on some of the UK’s leading scientific and clinical research.

The Swansea superstore will be open from 9am to 6pm, Monday to Saturday and 10am-4pm on Sunday.